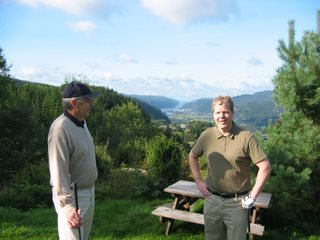 Click on the pictures to get enlarge the picture; doubleclick to get it even bigger.
Lagt inn av TorreyS kl. 12:19 p.m.

Indeed I think we both look forward to a rematch and hopefully lowering the scores substantially. Then again who cares on such a beautiful day, in such a gorgeous setting. At least Birger gave me no problems with the driver incident...those Selands may not give Tiger much competition, but they are often gracious.